Etymology and a Universal Translation

Hello everyone, after a great guest post last time out, it’s time to get back to some of my own content! While I’ve asked ‘What’s in a word?‘ before on this blog, today I thought I’d strike up the discussion again from a slightly different perspective by looking at what is contained within the most important word in our profession: translation.

Beyond (hopefully) uncovering a few interesting little tidbits about the term by looking at the roots of the word ‘translation’ in several different languages, I also want to explore the various shades of meaning that each one offers us and question whether or not there exists a universal conception of ‘translation’.

An obvious starting point for this discussion is Andrew Chesterman’s 2005 paper ‘Interpreting the Meaning of Translation’, in which he sets out to tackle the very same question and argues that etymological variations signal different approaches to and understandings of translation across the world. As such, I’d like to analyse and expand upon his paper here by looking at several examples from different languages before discussing their overall relevance to one-another.

Starting with the fairly well-known roots of the English term, the word ‘translation’ comes from the Latin translatus, the past participle of the verb transferre. Meaning ‘to carry across’, this term is itself a translation from the Classical Greek metapherein (meta- [over, across] + pherein [to carry, bear]), from which we also get the term ‘metaphor‘.

For Chesterman, a Standard Average European ‘translation’ derived from these roots is therefore ‘etymologically a metaphor, whereby something is, in some sense, something that it literally is not.’

While these Latin/Greek roots are also shared by many modern usages of the term in Romance languages, these languages still display subtle departures from the connotations contained within the English ‘translation’.

The French term traduction, Spanish traducción, Italian traduzione and others all come from the Latin transducere (trans [across] + ducere [to lead]) and therefore see us making the slight shift from ‘carrying across’ to ‘leading across‘ – something that will be discussed further below.

Elsewhere in Europe, despite the fact that many languages of the Germanic and Slavic branches simply calqued their terms for the concept of translation from the Latin/Greek model mentioned above, this process still allowed for several subtly different nuances to emerge as the word moved into new territories. The German übersetzen [literally: to set across] and Swedish översättning, for example, contain suggestions of ‘passing over’.

Beyond this pattern of calquing, meanwhile, the Dutch term vertaling is literally a ‘re-language-ing’, combining the prefix ver- [meaning a ‘change’ or ‘move’ or ‘re-‘ in English] and taal [language] while the Finnish käännös literally means ‘a turn, a turning’, noticeably deviating from the standard European trends.

For Chesterman, the Finnish term ‘highlights difference, a new direction, entering a new context; what is not highlighted is any sense of preserving an identity, maintaining sameness’.

Curiously, käännös also means ‘to steal’ in Finnish slang, adding yet another dimension to the many possible interpretations of what it means to translate.

Even further afield, the Mandarin Chinese word for ‘translate’ is yì or fānyi with the verb fan having the basic meaning ‘flutter’ – suggesting unstable movement and changes of state.

Finally, in an interesting example from Maurizio Bettini, Igbo – a language spoken in Nigeria – uses the words tapia and kowa to signify ‘translation’. Both words are made up of an element that means ‘narrate‘ or ‘tell‘ and another that means ‘break, decompose‘. For Bettini ‘[i]n native conception, translation thus consists in a practice that “breaks” a certain series of utterances and then “re-tells” them’.

Anyway, enough examples. According to Chesterman, these various etymologies suggest differences in the way that translation is perceived within those cultures and unmasks different approaches to the activity at hand.

Using three separate etymological sources (all included in the examples above – 1. The English term from Latin/Greek roots, 2. The German or Swedish calques and 3. The Romance language ‘leading across’) he explores the way in which the act of transferring the content to be translated (labelled X) is framed differently within each of these usages:

Despite conceding that more work is required in the area, Chesterman finishes by hesitantly suggesting that these different paths indicate that perhaps there is no universal conception of translation:

‘At the very least, the present preliminary study illustrates how the notion of translation has been interpreted in different ways in a number of different languages. It shows that not all these interpretations give the same priority to the preservation of sameness which characterizes the words denoting “translation” in many modern Indo-European languages.’

However, while these etymologies and developing meanings are fascinating, any implication that the roots of a word delimit the extent of our understanding of its significance in any way is an obvious oversimplification.

The English notion of translation is not tied to a rudimentary idea of ‘carrying across’ but rather entails everything that translation has come to stand for in the ensuing centuries.

Though the Latin origins of the modern English word perhaps demonstrate how translation was once viewed, our current understanding encompasses nearly all of the various meanings borne out of other languages’ etymologies of translation.

In other words, no matter what path we have taken to reach our current understanding of the term, translation/traduction/übersetzen etc. cannot be reduced to historical appraisals of what they once signified. For me, translation is not about ‘carrying across’, ‘leading across’ or whatever else, but rather all of these and so much more. This is the ‘universal translation’ of today.

Indeed, in my opinion, the ‘universal translation’ is best seen when we consider the many metaphors that exist for the activity, something I’ve explored previously on this blog, as these demonstrate the multiple interpretations in action.

In English alone we see translation as transformation, building, turning, conquering, theft, cannibalism and so much more beyond the conception its etymological roots initially provided.

Ultimately, just as etymology suggests that translation is metaphor, metaphors for translation show that it is so much more than mere etymology. 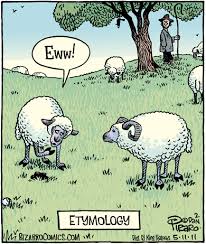 4 responses to “Etymology and a Universal Translation”